After months of rumors and sneak peeks, Hyundai has finally unveiled its Kona subcompact SUV. The boldly designed small crossover goes on sale this month in Korea, with North America and Europe coming online shortly thereafter.

I ventured over to Korea to get an early look at the new model to see if it has the goods.

Design
Like most of Hyundai’s recent designs, the Kona is certainly distinct. In fact, it’s downright aggressive by class standards, and I like it. It stands out in a way that reminds of Nissan’s almost martian Juke, a model that’s soon to depart our market. The Kona’s short overhangs and long wheelbase give the Kona a tight, capable look, and its tapering windowline and a two-tone roof (which, in the case of the model seen here, is blacked out) lend it a slicked-back appearance.

The Kona’s face is defined by its narrow LED head- and taillights, which are unusual in both shape and layout. The daytime running lamps and turn signals are housed in a narrow slash just below the hood, while the headlamps are fully separate units bookending Hyundai’s new cascading grille design. This car should be easy to spot, day or night.

I’m less sure about the Kona’s “black armor,” the plastic cladding that rims its wheel wells. Perhaps this detail gives the design a more rugged look, but to me, it reminds somewhat of Toyota’s first-generation RAV4 or something French. That isn’t to say the cladding doesn’t work, just less so than the rest of the aesthetic to my eye.

At 13.7 feet long and 5.9 feet wide, the Kona is similar in size to many direct competitors, though a bit shorter. Its 102.4-inch wheelbase is right in line, as well.

Powertrain and suspension
The Kona’s base engine is a 147-horsepower, 2.0-liter four-cylinder that runs on the Atkinson cycle to maximize fuel economy. It develops 132 pound-feet of torque at 4,500 rpm and is mated to a conventional six-speed automatic transmission. Hyundai claims a decidedly relaxed 0-to-62 mph time of 10 seconds and a top speed of 121 mph.

The step-up engine — the one North Americans seem most likely to be offered — is a tuned version of Hyundai’s well-known 1.6-liter Gamma four. The turbocharged engine is rated at 175 hp and 196 pound-feet of torque, with peak twist coming on between 1,500 and 4,500 rpm. The smaller, but more power-dense engine moves the Kona to 62 mph in a claimed 7.7 seconds and on to 131 mph, sending power to either the front or all four wheels via a seven-speed dual-clutch gearbox.

There are three driving modes, Sports, Normal and Eco, all of which adjust the throttle, transmission shift points and torque mapping to optimize for the driving behaviors their names suggest.

Overseas buyers will also be able to order a turbocharged 1.0-liter, three-cylinder gas engine, as well as a 1.6-liter diesel, but don’t expect these to come stateside, nor their available six-speed manual transmission.

Fuel economy estimates for North American engines have not yet been made available.

On the suspension side of the equation, all Kona models receive MacPherson struts up front. Meanwhile, the rear setup varies depending how many wheels are driven: Front-drive models get a simple torsion beam architecture, while all-wheel drive versions receive a more sophisticated multilink array. This may suggest that AWD is the way to go, even if you don’t need the extra foul-weather performance.
Gadgets
The Kona features a bunch of information and entertainment tech, some you’d expect, some you might not. Infotainment systems include standard Android Auto and Apple CarPlay compatibility, and navigation and HD Radio are available, as are 4G telematics.

Console-based wireless charging is also available, a first for this category. The Kona will be able to tell you when your phone is fully charged, or if you’ve left it in the car while exiting the vehicle.

Another unexpected-for-the-class feature is an available head-up display. It’s admittedly the less-sophisticated type as seen on some Mini and Mazda models, but it will still display speed, sat-nav directions, audio info and more.

Instead of projecting directly onto the windshield, this type of HUD displays information on a gauge-cluster-topping piece of glass that folds out of the way when not in use. Such systems tend to eat up less space inside the dashboard, plus they weigh and cost less, but they don’t tend to look as polished. 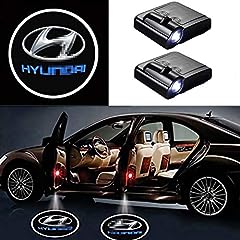 √ EASY & QUICK INSTALLATION，These Hyundai door light projector can be easily installed in minutes with 3M tapes included, NO DRILLING, NO WIRING needed. No Damage to your car at all. √ UNIVERSAL FITS, The Hyundai door lights logo Can be installed on ... (as of November 26, 2020 - More infoProduct prices and availability are accurate as of the date/time indicated and are subject to change. Any price and availability information displayed on [relevant Amazon Site(s), as applicable] at the time of purchase will apply to the purchase of this product.) 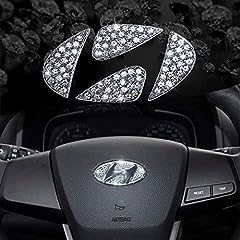 ✔Crystal Rhinestone on Steering Wheel ✔Enhance Appearance of your Car, Perfect Gift for Woman ✔Design to Fit Hyundai Elantra Sonata Accent Tucson Nexo（2012-2020） ✔Great decoration:make your your car look more luxury and conspicuous. ✔Easy installatio... (as of November 26, 2020 - More infoProduct prices and availability are accurate as of the date/time indicated and are subject to change. Any price and availability information displayed on [relevant Amazon Site(s), as applicable] at the time of purchase will apply to the purchase of this product.) 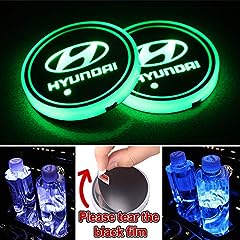 ✔【NOTE: You have to tear the black protective film to show the logo. After charging, please turn on this in the dark.】 🚗【7 colors】with "white", "red", "blue", "green", "yellow", "pink" and "ice blue" can be switched freely. 🚗【Intelligent Sensing】Auto... (as of November 26, 2020 - More infoProduct prices and availability are accurate as of the date/time indicated and are subject to change. Any price and availability information displayed on [relevant Amazon Site(s), as applicable] at the time of purchase will apply to the purchase of this product.) 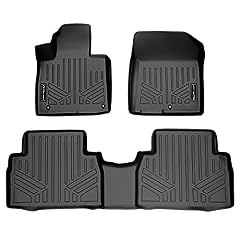 Top of the line all-weather, stain-resistant, 100% odorless protection that gives your car, van, truck, or SUV interior a first class look while protecting the resale value Custom fit precision of the mat protects your vehicles carpet floor by stoppi... (as of November 26, 2020 - More infoProduct prices and availability are accurate as of the date/time indicated and are subject to change. Any price and availability information displayed on [relevant Amazon Site(s), as applicable] at the time of purchase will apply to the purchase of this product.)