The 2019 RAV4 goes on sale toward the end of 2018, with a hybrid version to follow early next year.
Toyota has discarded last year’s quirky styling. The new RAV4 tries to be all things at once. It looks better, to be sure, and its blocky lines are actually more aerodynamic than the outgoing model. The RAV4’s chunky front fascia gives way to a chiseled side profile that’s so blocky it could have come from VW’s design studios. At the rear, the chunky roof pillars give the appearance of being split; certain RAV4 trim levels offer a contrasting roof color.
At 180.9 inches from bumper-to-bumper, the 2019 RAV4 is a hair shorter than last year’s model. That missing girth was added to its width, which grows slightly to 73.0 inches. A longer wheelbase provides more rear-seat room, but Toyota hasn’t specified interior measurements yet.
Inside, the RAV4 features a nearly symmetrical dash that puts its standard 7.0-inch or available 8.0-inch infotainment screen up high on the dash. Climate and comfort controls sit below, including a control knob for various drive modes next to the transmission lever.
Underhood, standard RAV4s get a 2.5-liter inline-4 paired to an 8-speed automatic transmission. Toyota hasn’t detailed horsepower and torque specs, but we’ll update this space when we know more. The automaker did say to expect about 15 percent more power for the standard RAV4, which would put it at over 200 hp.

The RAV4 Hybrid swaps in a continuously variable transmission (CVT) and a battery pack. Again, Toyota has held details like horsepower and battery capacity until closer to the RAV4’s on-sale date, but the automaker says that the RAV4 Hybrid will be the most powerful version of its compact crossover.
Both powertrains comes standard with front-wheel drive and will offer a choice of all-wheel-drive systems, depending on the trim level. The standard system fitted to non-hybrid RAV4s can be upgraded to a system with dynamic torque vectoring, which Toyota says more rapidly distributes power from axle to axle and from side to side. The upgraded all-wheel-drive system is included on Limited and Adventure trim levels. All versions of the RAV4 with all-wheel drive now feature a control knob with various off-road traction control modes, another sign that Toyota is serious about butching up its compact crossover.
The RAV4 Hybrid features its own all-wheel-drive system, which Toyota says sends more power rearward during normal driving situations than the setup on non-hybrids. The range-topping RAV4 XSE Hybrid features a firmer suspension and special steering tuning, which Toyota says make it the corner-carver of the group.

2019 Toyota RAV4 features and safety
The 2019 RAV4 is a big tech upgrade over last year’s model. An available camera-based rearview mirror eliminates blind spots caused by the crossover’s chunky roof pillars and its rear-seat headrests.
More luxury features are available, such as cooled front seats, heated front and rear seats, a panoramic moonroof, and a power liftgate, but Toyota hasn’t detailed trim levels or specifications for the new RAV4 yet.
A 7.0-inch touchscreen for infotainment is standard, while an 8.0-inch version is optional. The larger screen brings with it satellite radio, and a number of smartphone-based apps, but both screens feature Apple CarPlay, Amazon Alexa connectivity, and a Verizon-powered Wi-Fi antenna. A JBL-branded audio system is optional, as are up to five USB ports and a charging pad for Qi-compatible devices. Android Auto isn’t available, at least not yet.
Toyota also throws in two years or 25,000 miles of scheduled maintenance.
Full Review https://www.thecarconnection.com/overview/toyota_rav4_2019 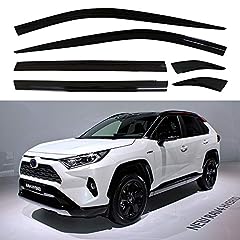 WANT TO OPEN YOUR WINDOWS, BUT CAN'T STAND THE NOISE? Finally, a simple noise reducing deflector can help solve this pesky problem!Window Deflector is specially made to reduce interior wind noise so you can enjoy a relaxing drive. Side window deflect... (as of October 14, 2020 - More infoProduct prices and availability are accurate as of the date/time indicated and are subject to change. Any price and availability information displayed on [relevant Amazon Site(s), as applicable] at the time of purchase will apply to the purchase of this product.) 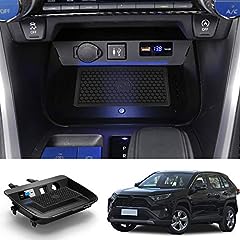 Car Mount Custom fit Car Wireless Charger Mount Fit for Any Phone for Smart Phones with Wireless Charging Funtion. Quality Selected Chrome and ABS Material To fix Your Car,or Light Tablets Safety When You Drive with Car Phone Holder,Correspond Perfec... (as of October 14, 2020 - More infoProduct prices and availability are accurate as of the date/time indicated and are subject to change. Any price and availability information displayed on [relevant Amazon Site(s), as applicable] at the time of purchase will apply to the purchase of this product.) 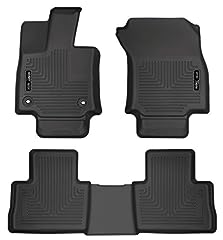 Our FormFit Design process perfectly forms each liner to the detailed contours of your specific ride. Our exclusive StayPut Cleats help keep your liners securely in place. Our sporty liner material is rugged and can stand up to abuse like no other.Th... (as of October 14, 2020 - More infoProduct prices and availability are accurate as of the date/time indicated and are subject to change. Any price and availability information displayed on [relevant Amazon Site(s), as applicable] at the time of purchase will apply to the purchase of this product.) 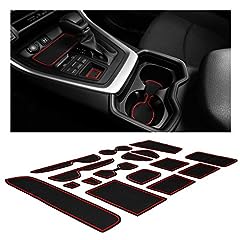 ✅NEW CAR LUXURY THAT LASTS - Our custom car interior liners for RAV4 and cup holder mats are engineered in the USA with a unique design that offers a precise fit you won't find elsewhere, perfectly placed tab handles for easy removal, a sleek mods lo... (as of October 14, 2020 - More infoProduct prices and availability are accurate as of the date/time indicated and are subject to change. Any price and availability information displayed on [relevant Amazon Site(s), as applicable] at the time of purchase will apply to the purchase of this product.)

It looks very much like the Volvo XC40, especially the two tone color design, black roof and white roof options.

Toyota not launching all models in india

OMG…i thought they brought back the Pontiac Aztek. THat thing is UGLY!

this car is a fake volvo

Nothing new….ugly front designs like innova….still stiff suspension why not collaborate with fox…

9:16 That wheel arch styling is somewhat “controversial” to say the least.

I want the names of the music playing in the back ground.

Who a pile of

O.Szabo Jr. Again, will be the trendsetter for others to follow. GREAT JOB Toyota Again.

Unfortunately tho, RAV4 is not global SUV like CRV.

No Android Auto, no party

Until now, it has uncommon performance and launches all over the world.
It deserves the love of the people of the world.

I test drove this and the Highlander. My only issue is that black chunky rear view mirror attachment, and the wider rear view mirror. They were too obtrusive for me. I like the older models where you can see more of the sky, and less obtrusiveness.

Looks like a $40k car, ravs were meant to be affordable smh

I love it! I will buy! Price and date delivery is interesting!:)

They need to bring back the v6. Owned the 2006 sport and it was surprisingly fun to drive with the 270hp.

Instead of copying the beginning of the Shining, maybe you might want to show this car in the traffic we all deal with everyday, for an honest change.

We love you Toyota

When is this car coming out and does it have led lights?